Hello hello hello and welcome to Friday Finance here on Constructed Criticism. This week we will be discussing a topic that can be view as a point of contention among players and traders. I have attempted to discuss the topic without using passionate or emotive language and hope that no one is offended if they still disagree by the end. After that there will of course be this weeks Promising Pickups.

One of the biggest complaints that a MTG finance mind/trader hears is “You cause prices to rise. It makes it harder for people to buy into the game.”. This is a complete fallacy that people trading cards cause a cards price to rise and therefore cost more. The MTG market is almost completely controlled by the premise of supply and demand. If I card is wanted by a large section of the community then the price will rise accordingly until it hits the sweet spot between there being enough supply to give people what they want and the price is right. For example is there were only 100 copies of a card in existence and 1000 people wanted them then 900 hundred people are going to miss out. This allows the seller for the 100 cards to price accordingly to the 100 people willing to pay the most. This method will price out 900 people, but in all actuality they were unlikely to get a copy anyway due to the limited supply for the pool of people wanting a copy. This is a simplified model, but what it shows is that the market moves to buyer demand in correlation to the amount of supply sellers have. If anything within this model a group of buyers would still end up with a good deal as they would be paying less than expected. This can be seen most clearly in action when a dreaded buyout happens. People hear the word buyout and freak out, but in actuality its just an artificial way of readjusting the market price of a card that hasn’t been kept updated and relevant. A card can only stay at the same price for a short amount of time, either a re-print occurs and the price will dip accordingly or slowly the amount of copies bleed out of circulation. Either getting ruined, stored away under beds or picked up by casual kitchen table players who never sell on their cards. When someone conducts a buy out all they are doing is creating an artificial new price. The fact of whether people are willing to buy a high enough amount of the supply will decide whether that is its new price. “But now I can’t afford the new deck I want!”. This is a sad moment when you’ve been saving up for a new deck and suddenly the price hikes on one of the cards within it. If this has happened to you, first I would say to take it as a learning point and buy the more expensive cards when you have the money for them and not wait to purchase the deck as a whole, this can help mitigate being priced out completely. Other than that the only way to find any sense of acceptance in circumstances like this is to view it from the view point of the seller. The seller at the original price was getting a bad deal. The card was worth more than he was getting for it, but due to the simplified metrics people use to price cards (e.g. looking at one site) then the price struggles to change, even if the demand has risen and the availability has fallen. While a spike, caused by buyout or not, is sudden and can be painful, it is only a correcting action allowing both parties to receive what is fair an reasonable. 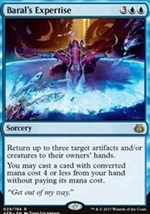 Baral’s Expertise is a new card from Aether Revolt and I feel it has the potential to slip in to the Jeskai Cat deck or just a control deck. It hurts that it is a sorcery for sure, but the amount of times I saw the deck being behind and needing something like this during SCG Columbus was incredibly high. I would recommend picking up a play-set or 2 before the pro tour. If this card still doesn’t see play never fear, a mana reducing card like this will forever see play in EDH and could even push into Modern/Frontier. 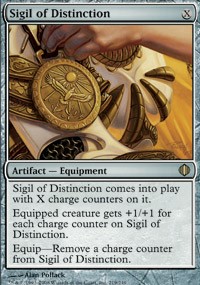 The Cheerios deck is being heralded as the new combo deck to see play in Modern. I can’t tell you whether the hype is real or not. It starting to see some results appear, but it’s to early to tell. What I can say is that every other card in the deck has started to spike and this card, a card with only one printing, has yet to move. Maybe it’s time to make it move. 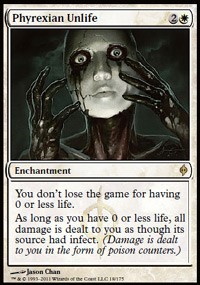 This card and the next are for the same reason. Almost every deck has taken a hit by the recent bannings or has been reigned in by the printing of fatal push. However, one of the decks that has escaped the wrath of WotC is Ad Nasuem. I can see both Phyrexian Unlife and Angel’s Grace start to rise is value as the deck starts to form a slice of the meta. The only possible fear is maybe a banning of Simian Spirit Guide is the deck becomes to popular. Just something to think about. 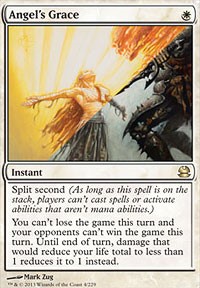 Thank you all for tuning in and reading this weeks helping of Friday Finance. I hope I have helped you understand the reason buyouts and price spike happen and are a necessary part of the finance world and I hope my picks will make you some money. See you all next week.