Hey, guys! It’s been a pretty crazy couple of days! With the news we received yesterday, I wanted to hop online as soon as I could and put up some viable, budget friendly deck lists. Especially now that what Wizards has deemed as the ‘oppressive’ cards have been Summarily Dismissed by Purphoros’ Ban Hammer. A few of these lists have been updated with some new Aether Revolt cards but none will have a sideboard written out for them, as we don’t really know what the meta will be like until after the Pro Tour. Whatever your thoughts are about the bannings, we’re at a place where what’s done is done and we have to prepare for this new era. Budget decks will probably become increasingly popular since we don’t really know if WotC will give lists of potential bannings, so I wanted to get a jump on it. Hope you enjoy some of the craziness and let me know what you think!

First up is one of my personal favorites. Get a Thing in the Ice or a Dynavolt Tower down early and watch the fireworks. By the late game, more often than not, you can meet the requirements to flip the Docent of Perfection in a single turn, almost every time I’ve held up a Negate or a Spell Shrivel to get the final Wizard token while also protecting the Docent. It’s a very fun and interactive control shell that can be both pro- and re-active. 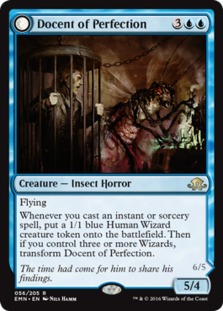 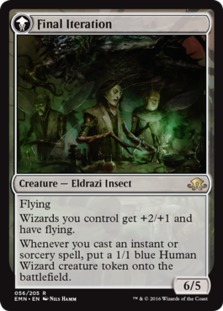 Thing in the Tower

3x Thing in the Ice

1x Pore Over the Pages

1x Rise from the Tides

Next up is another super fun shell that once again revolves around creating energy and abusing Dynavolt Tower. This one ramps ramps ramps into playing multiple high-cost spells each turn and turning that value into taking control of the match. Rashmi, Eternities Crafter is so good in this she almost seems broken. The synergies and value between her and Seasons Past is incredible. Altered Ego is another card that surprised me by how good it was. It gets past all the counters in the meta and quite a bit of the removal (if you can get enough +1/+1 counters on it or ‘mimic’ a metalwork colossus!). The only card from Aether Revolt that I may play in it is Rishkar’s Expertise, and even then only as a 1 of. 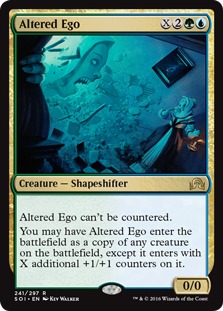 1x Pore Over the Pages

4x Servant of the Conduit

This next one is a bit of a pet project, I see something in it and I’m on the pursuit! The deck itself is a fused conglomeration between an Aggressive style and a Drain/Gain type backup. You can get an easy flip of the Lone Rider while also having evasion in the air to get in early damage. Then slowly siphon the rest while making calculated blocks and keeping your life total above zero! Also, before you ask, yes. Yes, it has won with Felidar Sovereign before and it’s always fun to do so.

4x Authority of the Consuls

I am thoroughly surprised I’ve not seen more of Metallurgic Summonings. It already had what it took to compete in a Standard with both Emrakul and Smuggler’s Copter (r.i.p.) so maybe we will see more of it in the future. Curious Homunculus is crazy good in a heavy spells build and I’m almost never sad to see one in the early or late game. I hope we will see more of that little guy coming up too. Your goal here is to keep the board clear and then swing in with your constructs in the late game. Curious Homunculus can attack in the early to mid game and as the board stays clear. The prowess trigger is useful as well as the cost reduction for your spells. I may end up going down a Grasp of Darkness and 2 Murder for 2 Yahenni’s Expertise and a single Baral’s Expertise. Two cast triggers for a Metallurgic Summonings isn’t terrible. 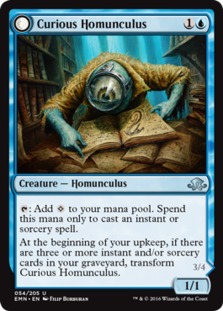 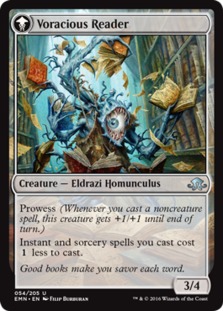 This last one is just a quick build around the investigate mechanic. The lines are pretty clear in it, make clues and hold off death until you drop a mechanized production. See? Easy. Although I would sideboard some counters for those pesky decks that have enchantment removal. On paper, it looks like it could potentially have the enough clues at the beginning of your turn five or six, but should hold its own enough to last to turns seven or eight consistently. 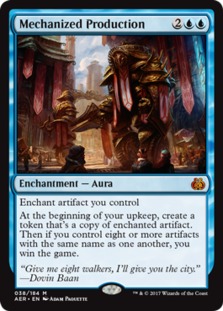 Like I said above, none of these were posted with a sideboard but there will definitely be some things to keep an eye out for. Artifact destruction is still the main priority. Even though Looter Scooter isn’t legal anymore, you still have major combo pieces to look out for. Panharmonicon and Aetherflux Reservoir can finally stretch their legs. Aetherworks Marvel will most likely be experimenting with Ulamog, the Ceaseless Hunger and probably some combination of the Kaladesh Gearhulks. Skysovereign, Consul Flagship is still a major threat as well as the new Heart of Kiran.

B/R Aggro will pick up where it left off and hit the ground running and Mono-Red Aggro may now have the breathing room to be a viable threat. Don’t forget about the new Saheeli combo either, and be ready to disrupt it; at least in the first few weeks as people decide if it’s viable or not.

Hopefully, all this jank got the creative juices flowing and you enjoyed some of the possibilities that are open to us now!

If you like the budget decks and want to see more with the new cards just let me know!