Hello and welcome to the newest part of the Constructed Criticsm Network, Friday Finance, a weekly article about Magic Finance where we hope to save you and maybe even make you some money on this hobby we all share.

This week I want to talk about Banned and Restricted list updates and how the most recent has effected the MTG Finance world. As you may of heard 5 cards were banned in this January’s update and for the first time since June 2011 cards were banned in Standard. The offending parties were Gitaxian Probe and Golgari Grave-Troll in Modern and Reflector Mage, Smuggler’s Copter and Emrakul, the Promised End. Now obviously with a banning comes a price drop for the card in question, the limiting of where it can be played will do that in it’s own right, but the fact that panicking players will flood the market as they try to get out of copies they own is the moment that money can be made.

Now this can’t be said for every card that becomes banned, for instance while Reflector Mage was deemed powerful enough to suffer the ban hammer in Standard, the card has limited to no use in any other formats, couple this with the fact that most casual players will find the card “un-fun” your unlikely to find it being cast on many kitchen tables. However, the card may have a minor future in EDH. The foil price before the ban was just shy of $6, but has now dropped to $3. While at $3 they’re in unlikely any money to be bad, if anyone at LGS is trying to dump a play-set and you could acquire them at around the $1 each range, I would recommend grabbing them and sitting on them. Another card that will likely be hard to profit on would be Gitaxian Probe. Due to it being a staple in older formats such as Legacy you could be tricked into thinking grabbing them while the market is flooded would be a good idea, but Legacy as a format is rather stagnant playerbase-wise and your unlikely to find a sudden surge in people needing to get more Probes. 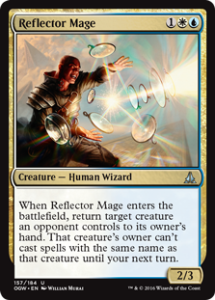 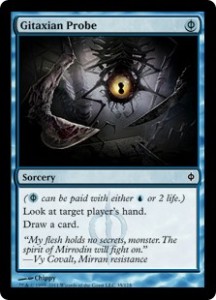 Golgari Grave-Troll, the other banned Modern card, is an interesting proposition. Having been only recently unbanned in 2015, the card had just started to rise in price. The card is key component in Dredge strategies throughout the Eternal formats. However, due what could be called a meteoric rise in Modern, many players will of bought in and now be looking to shift them quickly. Couple this with the fact that Manaless Dredge is one of the cheapest entry points for Legacy these may be worth considering. Having dropped from $11-12 to $6, if you find anyone looking to move these sub $5 I would take the plunge. They won’t be a quick mover, but it will be unlikely these will go any further down without a reprint, which could only be done if they were to do another Eternal Masters style expansion set. 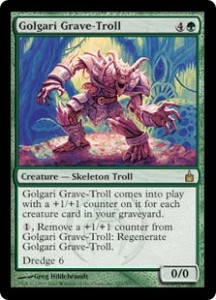 The last two cards that have been banned are Emrakul and the Copter. Both these cards are clearly powerful and have now been deemed to powerful to for this Standard format. What this does mean is that people will be outing these quickly and cheaply. Now I can hear you asking why would we want these cards, neither has shown any promise in any Eternal format. The first thing to recognize is that while neither has seen play, they both could easily find homes. A Mindslaver effect on a 13/13 with protection that can easily cost around 7 Mana is obviously efficient, but still high for a fast format like Modern. However, with many Hyper Aggro Combo decks being neutered with Probe being banned and the printing of efficient removal like Fatal Push will most likely cause the format to slow, maybe giving a chance for new Emrakul to shine. With Smuggler’s Copter, there were whispers of it maybe seeing play in Affinity. While this never materialized, this doesn’t mean that it could never happen and with the card being colorless it suffers no constraints leaving it a viable option for almost any deck. Surprisingly though it isn’t Modern applications that I believe will give these cards a financial boost, but instead the fledgling format Frontier. With the recent news Channel Fireball will be running Frontier side events at their GP’s, the format is starting to gain big names behind it and could possibly have a chance of making it as a official format. It’s this format that I believe these two cards will rediscover value. Emrakul is just a powerful card and would likely impact any format that doesn’t have better options at her power level, while Smuggler’s Copter was a test into uncharted waters with the new card type of Vehicles. With this being the cream of the crop, it would also likely see play in the format. With they’re current prices of $10 and $4 respectively, I would recommend snapping them up from any Standard players looking to out them quickly. 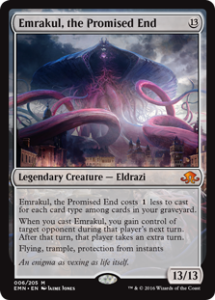 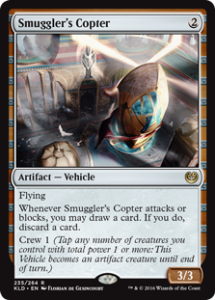 Banning’s have a weird effect on card values and it is unlikely that just the cards directly banned will be the only ones effect. The whole Modern Dredge list is likely to take a hit, due to even if it continues to be viable, the deck has been hurt. The same goes for cards like Spell Queller and Chandra, Torch of Defiance. Both cards were key components to standard decks that have been hit, but also both have Modern potential. Again these cards will unlikely dip to much, but if you see either of them going cheap I feel they are respectable pick ups. 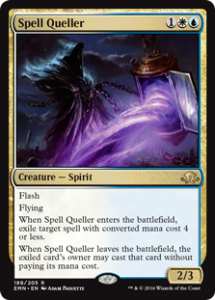 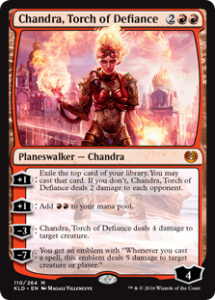 Every week I aim to bring you a few cards that I believe are sure things. Cards that have potential beyond what people usually see in them. This week those cards are From Beyond, Sram, Senior Edificer and Sram’s Expertise. From Beyond is an Enchantment from Battle for Zendikar that puts a Scion into play on your upkeep. You can then pay and sacrifice it to tutor up an Eldrazi card. This card is an EDH dream. It makes mana, it makes bodies and it can tutor. This card will start rising at any moment and they’re the card’s I love. Foils are currently going for around $2.50 and I can see this easily being a $15 foil. The non-foils aren’t as sure a money maker, but if like me you trawl through bulk, pull these guys aside. If you get these at 10c and sell in a few years time for a couple of bucks, you’ll be laughing.

Sram, Senior Edificer and his corresponding Expertise are both from the impending set Aether Revolt, but I believe both to be good pick ups for difference reasons. The Sram card will likely see fringe Modern play in decks such as Cheerios and Bogles, but will in likelihood become a EDH card. The card is currently pre-ordering at around $1.75 normal, but over $6 foil. The card has the potential to be a $10 foil, it could even see standard play and rise higher, but at $6 I’m not certain. However, if you can find these at you pre-release at $4-5, you’ve got yourself a likely little earner. 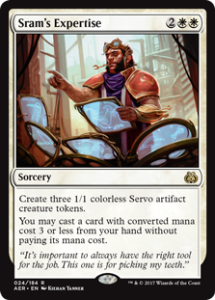 The Expertise though is a different beast. The only hope that I can foresee this card having is in a B/W Tokens build in Modern, but I do believe that the archetype may have a hope if the format does slow down post banning’s like it is predicted to. With cards like Selfless Spirit backing up the sweeper soft deck, I could see this being the piece it needed. Pre-orders are down to $1.75, but I could see this going sub $1 pretty quickly. If it does indeed find a hope in Modern your looking at around $5-7 easily.

Thank you for reading the first iteration of this segment and I hope you both enjoyed reading it and it makes your some money. Obviously not all recommendations will come to fruition, that is the nature of the beast, but I promise it is possible to finance this whole hobby with good purchase decisions.

A big shout out to Constructed Criticism for allowing me the platform to talk about this.
Happy Hunting