Friday Finance – Bulk It Off

Hello hello hello and welcome to Friday Finance here on the Constructed Criticism network. I first would like to explain my absence. I try and write these articles as close to the deadline as possible for the simple fact, I want to give you the most up-to-date information in regard to picks. It’s of no use to anyone if my information is a week out of date and the cards have already spiked. Unfortunately, every time I sit down to write something has come up. There has been bereavement, hospital trips and various work issues. However, I’ve decided to take a new method of content creation that will hopefully avoid these issues. So I aploigise for the lack of content these last weeks, something I feel like I’m doing more and more often. I hope this is the last time.
This week we will be discussing the idea that bulk is hard work and not worth your time and effort. We then move onto the potential movers and shaker. I also just want to throw out that the Patreon is still live, with a weekly video series is making good steps towards getting closer to release. Lets get it going.

Earlier today, on the Constructed Criticism Family facebook group, I posted an image offering this choice. A playset of Underground Seas or the equivalent value of bulk rares (running at 10c a card). The choice obviously can’t be a slam dunk for either party, mainly due to there being no constraints on the reasoning. For someone who will play with those Underground Seas every day for the next 10 years, that enjoyment holds a value that can’t be quantified.
However, in regards to financial plays, so all subsequent discussions are taken to be that the chooser plans on doing nothing this these cards other than attempting to profit from them, there is a correct decision. The bulk.
Now I already here the gasps, why would you want 1000’s of worthless cards over 4 of arguably most sought after cards. Well the idea is simple. You can’t lose with bulk. There is no feasible scenario where you lose with the bulk, whereas there are scenarios you do with the seas. Let’s break it down in three time periods. Short, medium and long term. The ball park figured used is TCG Market for Revised, which is $390 dollars each. So $1560 worth of Underground Sea or 15,600 bulk rares.

Short Term:
You decide to sell the cards as quickly as possible. You get you exactly 10c a card on buy-list, likely having to pay postage to the large stores, or driving to your nearest store. So potentially loosing around $50 maximum. You walk away with your $1500 dollars pretty quickly and easily.
For the Underground Seas you have to buylist them. TCG puts the buylist market price at $250, so you walk away with $500 less than if you took the bulk rares.

Medium Term:
You know there is a GP coming to you local area soon, so you decide to wait and off load them then. You spend a hour every so often whilst watching Netflix ogreing your bulk rares (Ogreing is where you sort into price categories e.g. a 50c pile, a 20c pile etc). You take the box there and get an average of 12c a card. It means you have to grind the floor for a bit, plus rewatch the last episode of Stranger Things because you missed the end as you were to busy celebrating the find that a whole patch of your bulk was now a dollar each, but in real terms you walk away with around $1850 cash.
You spent 3 months looking at your Underground Seas, not wanting to play them incase you damaged one and lost out on money you need for that modern deck you want. You take them to the GP and get offered around $350 cash each or $400 in trade. It’s hard to quantify the value if you take trade due to a vast amount of variables, however the cash would still leave you a couple hundred bucks short of the percieved market value.

Long Term:
You hold the Underground Seas for a year. The current trend is an increase of around 10% a year. Due to waiting that long you find a buyer willing to pay that price and walk away with $1700.
You hold the bulk and sell when some cards spike. This figure is almost impossible to quantify. However, I would be expecting to have sold around 1000 cards for about $1 a piece. Now that still leaves us with $1460 worth of bulk rares to sell at 10c a piece.

Now this isn’t every concievable scenario, but what I am trying to outline is that bulk doesn’t require you to spend hours and hours poring over them. They have a floor and that won’t move. Whereas whilst Duals are a good bet in regards to MTG finance, there is still that slim chance they lose value or plateau.

This week on Promising Pickups, we instead discuss a few cards to dump right now. 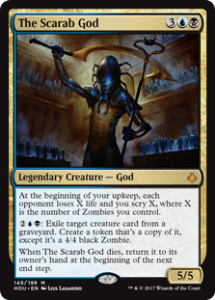 This card is a great card and have cross format applicability with EDH, but it’s price will start to fade soon. Chancers will start to open Hour of Devastation searching for this card and people will start to adapt within the Standard format or, heaven forbid, we will be listening to calls for another ban. Eurgh. 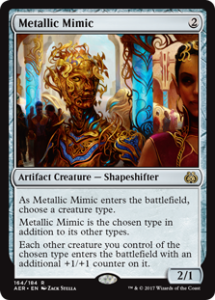 With tribal being on the tip of WotC’s tongue as of late this card has gone a bit crazy. It hasn’t seen much Standard play, but is being snapped up by more casual players. Ditch them now and reaquire come rotation for a longer term hold.

I can’t see this card holding this price. I get that it answer’s a lot of threats, but when has a 4 mana kill spell held this price? Let alone a rare. Honestly, I don’t get it.

This has been a fun article to write and I hope to stay on top of these from now on. Speak to you all soon.