Friday Finance – Spec Round Up

Hello hello hello and welcome to Friday Finance here on the Constructed Criticism network. This week we will be going over some of the previous Promising Pickups from the earlier issues. We will then have a our weekly Promising Pickups before a short conversation about the current community issues in our game. I urge you to read the last part and just have a think. I don’t pretend to be the most articulate person, in fact I am actually a sweary Englishman, but I do avoid that on these articles, so you can read on and know that I only lose my cool once. I rarely edit these articles when it’s a piece of writing like this, because I like to read raw emotional writing. However, I have added a warning for the swearing, so skip that paragraph if you wish. But I do urge everyone to take a read and just think on it. Please.
Anyway, let’s get into it.

Pickup’s: Where are they now?

The first Promisng Pickup’s came out on the 13th January. Close to a year later, we are going to look back on the Promising Pickups from then until March and see where they are now.

In the grand scheme of things, less than a year is around the length I would expect for a medium term spec, so there is potential that some of these haven’t come good yet, but lets see.

So as you can see here, two cards reached my estimates, Ancient Stirrings and Eldrazi Temple. But that is not to say it’s all doom and gloom. 7 cards haven’t gone up, but other than Tarmogoyf it has all been a buck or a few cents. This leaves these specs with the possibility of still going up. Now I recognise that some of the standard ones such as Elder Deep-Fiend have probably sailed. They are unlikely to ever break into an eternal format, and have now crept into bulk rare range. There has also been things such as the split card rule change that had a negative effect on the Expertise card’s. However, I am not to proud to admit, Goyf was a miss. The reprint was not expected and unfortunately I was wrong. Apologies if you did buy, but worry not. The card will start recovering soon and all may not be lost.

If this look back was helpful, please let me know and I will do them again.

This week we have three reprints on the block. All are on downswings, but are primed to be going up in the future again. 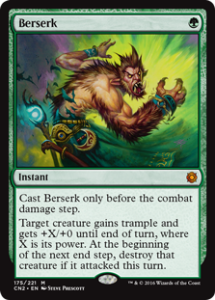 This card started at $30 when it was reprinted in Conspiracy 2. It has now reached $10. The price had something to do with availability, but honestly Con2 isn’t going to of changed that much. This card could easily become $20 again. 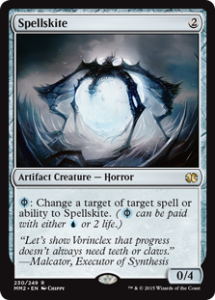 With Infect being pushed out of Modern, this sideboard card has lost some of it’s shine, but don’t mistake that for it being gone forever. Like all great staples, it will rise again. 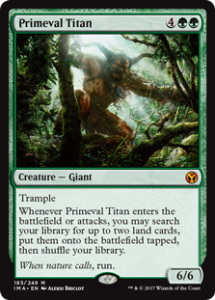 It’s Prime Time baby. The card that just can’t dodge a reprint, but I don’t like Iconic Masters was the final nail. That version is currently sitting at 30% less than the others, grab them now before they all reach the same price and you got a steal for buying new. As the great Barney Stinson taught us…

Now for the heavy stuff. I am a white male, born to a middle class family in a wealthy western country. As a whole, I have never suffered from discrimination. I have been picked on as a kid sure, but I had a tough skin, and quickly became quiety burley as a kid and that all stopped. This doesn’t seem relevant, but I wanted to preface all this. If you are a woman, a person of colour, disabled, LGBTQ+ or any other minority group and disagree with what I say. Please reach out. Educate me. I want to be on your side.

Now, this all started around a week ago, when a question was posed to Mark Rosewater on his blog, which he answered. The question was calling out the fact that the card Spike was portrayed by a feminine looking character, that may or may not be a woman. Now first of all, some people have said Mark shouldn’t of answered, but I disagree. I always believe tackling moronic statements like this is the best way to beat them. Ignoring them and letting them fester like an infected wound on the community is the worst path possible. Now I am not going to go into the whole question and response, Hipsters of the Coast have already done that and honestly, it’s better than anything I could do, so go read their thoughts and response here: https://www.hipstersofthecoast.com/2017/11/thoughts-spike-tournament-grinder/

Now this happened, and there were some grumbles and then Christine Sprankle quit. She quit Magic, maybe cos-play and this was because of a targeted campaign of misogynistic hatred co-ordinated by a man named Jeremy who is also better known at MTGHQ. Now, this man is a coward. There have been multiple stories of when people have actually called him on his vile filth in person, he squirms, he shrinks and he tries to pretend he didn’t mean it. That’s cowardly. He can’t even be bold enough to stand up for himself.

Now the biggest question that has been asked, but what did he say? or things like ‘She’s in the public eye, she needs a thicker skin’. Well first of all let’s start with the thicker skin part. How thick someones skin is, isn’t your decision to make. You punch someone and they die, you can’t claim they should have a stronger chin. You threw the punch. You made that decision, now you live with the consequences. Your actions have to account for others for how they are, not how you want them to be. ‘But what did he say?’ I hear people ask. Well first of all does it matter? Does it matter what he said when multiple people have come out and confirmed he is a cancerous individual. That he spews utter filth and venom with every word he says. But a few things I have seen him say include: Rating a women by a number, call cos-plays ‘money grabbing whores’, threaten to harass and bully people and GP Vegas etc etc. But that shouldn’t matter. I recently saw a poll on twitter, I apologise I can’t remember who did it (It was a prominent female MTG figure, if I find it again I will share on twitter.), that asked ‘Women, have you ever felt harassed at a MTG event’. The answer ‘Yes because I was a woman’ got 40% of the vote. 40%. Almost half of the women who play our game have been harassed because of their gender. Let that sink in. Think about your daughter, your mother, your wife or significant other and think how you want them to be treated. And now think have you ever done something that might of been construed as harassing? Or have you ever seen it? I know I have. Did I do anything. No. And that’s the issue. We all see it happening and think to ourselves “How disgusting”, but we don’t stop it. We don’t cause a scene. Well do you know what I have to say about that…

Fuck that. Fuck them. And especially fuck me for not having stood up before. Next time you see someone being an utter arsehole, stand up and tell them to get the fuck out. There is no room for people like that, and you know what will happen. Every single other person in that room will see that and have your back. They will do the same next time. Little steps like this stamp this shit out. Together we can end this.

Last point, if you are reading this and disagree. If you think that anyone deserves to be talked to like that when they have done nothing wrong or hurt anyone else. Then stop reading my articles. Don’t contact me to tell me your side. I don’t debate people who hold views like that anymore, because you won’t change unless your forced. Because deep down, you feel weak. That’s why you bully. That’s why you spew hatred at others, because you hate yourself and have to project it. Let that hate go and your world will be a better place.

If you aren’t a vile human being, but like me have been guilty of being a passenger. Now is the time to get off and help others. Just think on that.

That’s it for today folks. Do reach out with any feedback on the picks I make, or tell me a story of your MTG finance career. I love to interact with the readers, so just hit me up. All my contact information can be found at the bottom. I should also note that all views expressed in this article are my own and are not neccisarily shared by others on the network. Peace.