Friday Finance – The Not Friday Edition

Hello hello hello and welcome to Friday Finance here on the Constructed Criticism network. Unfortunately it’s not Friday, so I apologise if the appearance of this title made you think the work week was over, however the reason this edition is being realised off the correct schedule is due to the fact currently there is no schedule. This was meant to be a weekly update to allow me to impart the finance guidance and information I had to the loyal members of the Constructed Criticism. Finance is a large part of Magic The Gathering and I know for many players, being able to invest a small budget to ensure they get the biggest bang for their buck is essential. As many of you know, life conspires against you and even though I had the best interests at heart when I started this endeavour, ultimately I couldn’t keep to the schedule. Whether it was University, work, relationship stuff or moving house, there was never a point that I could sit down and write a piece I felt comfortable posting to this network. Constructed Criticism was and still is a creation of Spencer and unless I feel like I am adding to the network, I won’t dilute it with sub-standard content. But we will cover that in more depth at the end. So for now, lets get into the finance.

One of the biggest questions I get asked is how do I organise my collection. For me it has been a painstaking path of trial and error which has led to me sitting at a desk for up to 20 hours at a time sorting cards. The paper cuts I have received off relatively thick cardboard are numerous and it’s all down to never being fully comfortable with how my cards were stored. I tried having only cards worth money in binders, I tried having up to a playset of every card in a binder and the rest in boxes, and various other configurations. The issue I always had was due to me dealing predominately over Facebook forums was multiple trades would request  random uncommon’s/common’s. Cards that I don’t need filling up binder space, but need to find quickly at a drop of a hat. Selling a few cards at 25c each doesn’t sound like much, but those sales are nearly pure profit and help extend the image that I can match any large dealer. So I decided to sit down and sort through the 50 thousand odd cards I have and see what I could do. In the end I have settled on a system using binders and boxes. I have binders filled with every rare/mythic, this has lead to a fair amount of binders, but even bulk rares are bought by EDH players and it allows me to quickly flip them if they ever spike. The only rares/mythics that don’t make these folders are either foils or speculations. I instead have smaller folders that I store all foils in. I keep these in tight fit sleeves to prevent warping and scatter a few silica sachets on the shelf to also help. The rest of the collection goes into boxes. I have 1k boxes for each block/set that hold all of the uncommons, sorted in order and 5k boxes for the commons. I then also have 1k boxes for basic land (I do periodically drop off batches of unwanted land to my local LGS to help keep their basic land box filled and in return I can take away any full-art of interesting lands that end up there) and tokens. Finally I have a BFZ holiday gift box which I store speculations in. The three rows allow me to split short/medium/long term specs up nicely.
This is the current set up I have for my collection. It allows for organisation that enables to easy finding of specific cards, but also keep the storage space needed to a minimum. Whilst I understand this management is predominatley for my collection which fluctuates in size (sometimes reaching around 100k cards) if any player wants to discuss a better way to manage their collection, I am more than happy to share some ideas that worked for me in the past, but I outgrew.

All three of my picks for this week are cards that dodged a MM17 reprint and have the potential to start a upwards trend over the next 18 months. All 3 are played across the format, but are also relevant in other formats. 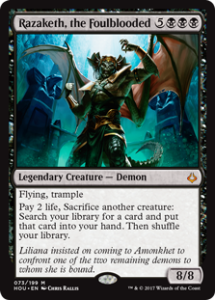 Hour of Devastation currently is holding almost no value. The cards are having a limited effect of any format and when sets like this come out, vendors get twitchy. And twitching vendors mean a limited amount of boxes being cracked to sell singles. Eventually some value will come out of the set and Razaketh is as likely a card to gain from this as any. The card will find a home in multiple EDH decks such as Meren, but could also hold it’s own as a commander in its own right. There has also been a re-animator deck that surfaced at the recent standard GP. This card could go on to have an effect in multiple formats. They’re the kind of cards I like to own. 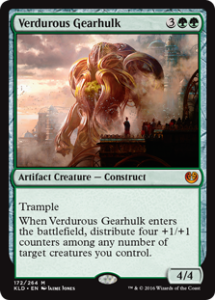 Verdurous Gearhulk has shown itself to be a powerhouse in previous standard formats and this one is shaping up to allow for it to flex it’s muscles once again. The card once held prices in the $20 range, but is unlikely to reach that height again. However, a more reasonable $15 is easily attainable and I would not be surprised for that to occur in the next few weeks as long as B/G keeps putting up results. 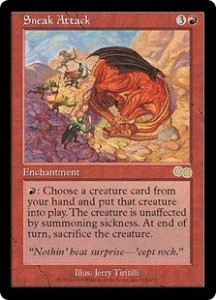 Sneak Attack is the namesake card of the Legacy deck and also played in EDH. The card once held a price tag of $80, but has since fallen with a reprint in the Eternal Masters set adding a new printing and more availability. On the other hand the original printing is almost exclusively preferred by Legacy players and the downwards curve the card has been on has started to bottom out. Now a card like this could potentially be seen in a set such as Iconic Masters, but if it dodges that reprint bullet expect the price to start to climb again.

Thank you for reading this week, it truly means a lot to be able to put out my content over this network. I have now reached a point in my life where I feel able to commit to this again on a weekly basis and attempt to put out content that I am happy with and I hope Spencer is as well. However I do need your feedback. So this week I will be running a poll next to the post that advertises this article to gauge the desire to read this and whether it is actually reaching the market I hope it does.

Until (hopefully) next week