Hello all. Apoligies for the delay in this Friday Finance. The article required the purchase of Aether Revolt product which was not available till friday. Hope you all enjoy regardless…

The crinkle and rip of opening a pack of Magic cards seems to be a universally enjoyed phenomenon within the MTG community. I dread to think about the amount of money spent by players on single boosters to just crack for that rush. The feeling of hope that you might pull the chase mythic, or now in the current climate a Masterpiece. However, like all forms of gambling loosing will always be more often than winning. The house always has the edge. This week on Friday Finance we will be discussing whether buying a box of boosters and cracking them is just further buying into the gambling lifestyle, or whether it can be a profitable endeavour.

I went out and bought two boxes of product on 1/20/2017. A box of Aether Revolt and a box of Conspiracy: Take the Crown. Now interestingly I got the Aether Revolt for $100 and the Conspiracy for $90, but the expected value (EV*) for the boxes were Aether Revolt coming in at $80 and Conspiracy at $120. Already you can see there is an obvious issue here. Why is the more expensive box of product coming in with the lower EV. This is because to begin with I worked out Aether Revolts EV without the inclusion of Inventions. When you add in they’re value you are looking at the EV being around $96. This brings it close to break even, but over a large amount of opened product the house is still winning. On the other hand Conspiracy 2 has an EV that is 33% higher than the cost (it is also worth nothing at this point that I payed more than is normal for the box currently due to getting it for my LGS). The reason Conspiracy 2 has such a high EV is that it contained many chase rares and mythic’s that had been reprinted for Eternal Formats, such as cards like Inquisition of Kozilek and Show and Tell. This is coupled with cards that make splashes in formats like EDH. However those cards led to the EV being $100 on release day. The rise has been down to the fact that cards like Leovold have become a big player in Legacy, but has only ever been printed in this set. The last contributing factor is that Conspiracy 2 just wasn’t opened much. It came just before Kaladesh, which has been labeled as a great limited format, so people just stopped playing with it after a few weeks. This has led to the price of the box dropping and the EV rising.

Ultimately I want the take away from this to be that while every booster box that you buy to crack could be the God box giving you hundreds of dollars in value, it is just as likely to the box that only contains bulk. If you are in the market to buy boxes to crack, then the safest option is to find the set that is going to be most likely to pay out profitably and for the foreseeable future that seems like its going to be Conspiracy: Take the Crown.

With the printed of Fatal Push and the likelihood of it’s warping presence in Modern as the premium removal spell, the need for BGx decks to play red (Jund) for Lightning Bolt or white (Abzan) for Path is greatly reduced. This may give more room for BUG to see a rise in popularity. If that is to happen, Darkslick Shores is a sure thing for that deck, just like Blackcleave Cliffs in Jund. 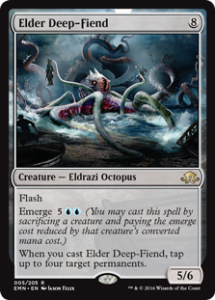 With the banning of Emrakul, the value of Eldritch Moon will be shifting and trying to find other cards to hold some of it. One of the those cards is likely to be EDF. With Emerge likely to become a strong strategy in the new Standard Format, this seems like a solid buy. 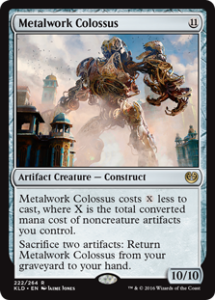 This card may become a format staple in the coming Standard. It’s not a sure thing, but with the format becoming more artifact centered it and the lack of Emrakul, this may just become the top end that some decks are looking for.

Thank you all for reading and I hope this was insightful.

*Expect Value (EV) is worked out by figuring out the average value for each rarity level and then adding in the likelihood you get one of those cards. EV is the value you would get if you were to buy a large amount of product so anomalies would be of no effect on the overall total.