Hello hello hello and welcome to Friday Finance here on the Constructed Criticism network. This week we will be looking at whether sealed product is still the sure financial dunk it used to be. Then we will have the returning Promising Pickups. Just want to throw out that the Patreon (www.patreon.com/cardboardcommodities) is still live, but a weekly video series is making good steps towards getting closer to release.
Before we start, I just want to apologise. This article was written last week and it was only when it got to Monday for me to start writing the next I realised that I never actually published it. So to apologise, there will be an article every day of this Pro Tour weekend.
Lets get it going.

Can You Seal It In The Air Tonight

One of the oldest statements for MTG finance is that sealed product is a sure bet. You buy it, sit on it and then a few years later you have made your money. No hassle. Well that’s what people say. But does it really happen still?
It’s obviously hard to talk about the newer sets. They haven’t had the time to mature that older sets have had, but the landscape is changing. There has been a radical change in sealed booster box prices since the original Ravnica’s and Innistrad’s. The subsequent Standard legal sets just aren’t holding they’re value.
In my honest opinion, and lets not forget, that is what this is. There is a real limit to true data on this subject. Only trends that you can see in pricing at GPs and on forums that players use to trade. But I digress. In my opinion the trend of decrease it sealed returns is the culmination of three factors. Large longer term player base, the opinion that limited has been worse, and finally increase in supplementary product.
First, the large longer term player base. Alot of the players buying sealed product to sit on are doing this because they remember the sets that now cost a fortune. They are looking back at that and thinking “What if…” and to ensure that never happens again, they are flooding money into the sealed product world and sitting on it. With standard sets, WotC prints to the demand. So increase demand, just means they’re is more of it, not that it is harder to find because it’s all being hoarded. We are starting to see players selling out of the boxes they have held for a limited to no profit margin because the outlook looks bleak. If I was holding, I would keep holding for as long as possible. The market may improve, but it’s not going to likely be that big pay day you hoped for.
Limited being worse. Limited is a weird format. People have pet formats they remember fondly, usually formats that were early in their playing career right around the point they started to turn the corner and were getting good. A lot of the more recent formats have not been met with great reviews. Are they worse formats than those we look back at with misty eyes? I am not the person to comment, I do know thought that an Innistrad Booster Box will cost you a fortune because people do love to draft that. Battle for Zendikar? Not likely people will be desperate to draft that in 5 years.
Finally, supplementary products. How did you use to get some Tarmogoyfs without buying singles? Or your Doubling Seasons? How about Damnation? The hidden world of the players gambling on opening old boxes looking for those golden ticket cards is an overlooked factor. But with Master sets coming out yearly, Conspiracy and Commander also dropping staples, the reprint game at WotC is strong right now. The rules for Master’s sets is got to be at least 3 years old. Right about the time sealed product used to mature. Now your big ticket cards are primed for a reprint, no one is buying old sealed product hoping for that big win.
In short, sealed product is hurting. Gone are the days of treating them like an investment that you could just leave to mature. The space requirement and initial outlay is making it look unappealing, coupled with the slow uncertain maturity means, for now at least, the sealed product door is closed.

*Aside* Before anyone asks about the well known content creator that focuses on this type of finance. All you need to do is look at what the video is for that week and what is suddenly for sale on the associated eBay page. Not saying it’s all lies, I just take it with a grit truck’s worth of salt.

This card has untold potential one day. It only takes one thing to be printed to blew this potential deck wide open. Sitting on these could be a long haul, but I can only see it going up from here.

Likely: $15 (Sky is the limit if this gets broken) 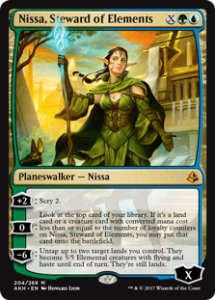 This planeswalker has hit what is likely to be it’s rock bottom. The card is powerful and being the first ever X cost planeswalker, it has become a hit in Commander. I can’t guarantee it see’s extended standard play, but I wouldn’t be surprised if it did.

Arguably one of the most polarising bans to of happened in recent history (minus standard shenanigans). The card is likely to never get lower, now you have two options with this. Buy now and come the nearing of the post modern PT ban list update sell into the hype of the potential unban. This is easy money, but small margins. The second is, just hope for an unban. It’s possible, so if that’s you plan, maybe limit the number of playsets.