Hello hello hello and welcome to Friday Finance here on the Constructed Criticism network. This week the discussion will focus on the new EDH pre-con decks that are being released and how the world of finance and speccing on EDH cards has had to adapt. We shall then discuss a few potential picks for the week before finally sharing the happening of week one in the United States. So let’s get started.

The MTG finance world was slow on the up take that EDH Finance was the new big dog in town. The format was a non rotating singleton casual format, why would there be much money to be made from that? Sure casual players buy funky cards, but that’s usually card that cost a few bucks, not big expensive ones. You rarely see kitchen table magic running duel lands. In the beginning there were a few names heralding the ease in which financial speculation and flipping was profitable such as Jason Alt (of Brainstorm Brewery etc). The eventuality, that has finally occurred, is when prominent members of a small community talk about something for so long, it becomes saturated with people doing it. This is what has happened to EDH Finance. Cards that were obvious pick ups for the pre-con decks are now being speculated on weeks before it is known whether they have received a reprint. This has lead to early spikes in cards, but also crushing losses for this people when they’ve got it wrong. Unfortunately, for the more wary/savvy financier the pickings have become thinner. This has in turn lead to a few members of the community leading the calls that EDH finance is dead and that potentially MTG finance is dead. The first comment is why when anything changes within any aspect of this game do people start claiming its the end? The second is that good smart moves within all aspects of MTG finance will likely always be profitable. We as careful, thoughtful financiers have to have be that, we have to make sure you aren’t shooting into the dark or gambling on long odds.
The obvious pickups before a pre-con release are no longer touchable at this time. They spike to early and don’t come down until they get a reprint. Instead we need to think of the more obscure, the combos with new cards in the set, cards that work with potential commanders from Standard Legal sets etc. That is the evolution of EDH finance.

The new pre-cons have been an interesting release. They were billed as a tribal release, and whilst they all do focus on a particular tribe, they are not tribal in the normal commander sense. There is less synergy than expected, but instead gives a good frame work for players to build from. Either going all in on the tribal or maybe branching away by doing something like Grixis Storm with Kess. As a whole, I think the release is perfect. It has opened multiple doors for the decks to do new things now they have lost the leash that was the 5th deck and colour themes. Long live the commander pre-con is what I say.

This week, all three picks come from the Masterpiece series’s. Whilst all of the cards from these have some amount of upside financially, the three I’ve picked out I believe to have immediate price rises on the horizon. 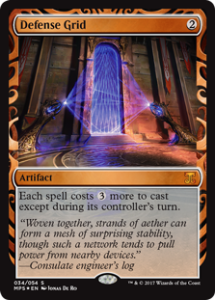 The card’s supply is drying out, once that happens it’ll be quickly back up to its original $60 price tag 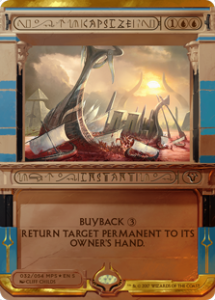 This card combo’s with last weeks pick Kess, but it also just a staple. Invocations are still currently a fence many people are sitting on, so get in now whilst the demand is lower than it should be. (This point stands for all invocations in my honest opinion)

Sword of Fire and Ice 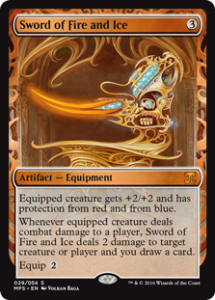 The uptick has started, but the art is gorgeous and it’s a powerful sword for EDH. I expect to keep rising and a stopping point may be a long way off.

My first week in the US has been completed. I was surprised about the lack of local LGS’s to were I was situated, but managed to make my way to a few. The first was one recommended by Adrian Carr, Coolstuff Inc Games in South Orlando. I managed to trade in a swathe of Standard cards, including many close to rotation for essentially there trade in value. With the extra 25% store-credit, it put me most the way to a box of MM17, which I will be cracking for the article next week, as well as a handful of cheap spec’s such as From Beyond and Aid of the Cowl.
Another surprising difference, is the availability of foreign language cards. Over in the UK, you would be hard pressed to find a booster box in any language outside of English, yet over here I’ve seen commander pre-cons in simplified Chinese and booster boxes in both Russian and Japanese.
Here is to the next week

Thank you for reading this week. The coming walk, is my last week in the US and I will be writing up my final purchases in the comfort for my UK home. Next week I will be discussing the cracking of my MM17 Booster box and if it goes well, potentially another box of product.