Hello hello hello and welcome to this weeks Friday Finance here on the Constructed Criticism network. I can only apologise for the lack of content over the last few weeks, my final year of University and various personal issues have conspired against me, but the information for this week filled me with such a need to share it with you the reader that I am willing to forgo sleep to share it. This week we will be talking about the Modern Masters supposedly large print run and then go on to promising pickups. Enjoy.

It has been widely reported that the incoming Modern Masters set is to the the largest yet. With whispered estimations of the print run being around 5x previous runs. This has, when coupled with reprinting of multiple format staples, caused the prices of the printed cards to start plummeting. With the set holding such a high EV (if taking prices before announcement) the prices had to crash to bring it closer to the actual cost of a box, but why such a large print run? Well the print run size is an unknown number. WotC don’t publish that kind of information so it can only be estimated through collaborating stories of LGS owners and managers. The story so far had been of how distributors were telling stores they could name their number in regards to boxes, but why would they say that? Was the print run going to truly be that large or were they working off the noticeable lack of advertisement for the set and the then likely lack of demand. Roll on a few weeks and spoilers started and off the bat we quickly got Damnation and the Zendikar Fetch lands. Now this set went from a half muttered “It must be coming out soon.” to a excited “Can’t believe we are getting these reprints on the 17th”. The story continued that the amount of product was going to be large and this meant these modern staples would soon be in a affordable price range for players wanting to get into modern. Now today. It’s 7 short days away from release and stores are getting their allocations in. My local store had ordered essentially as much as they possibly could and as an Advanced Plus store expected a fair shipment. They are barely getting above the minimum amount. This doesn’t appear to be a singular event either. Stores all around the UK are reporting the same thing. They are getting the minimum, but only just. How can something like this occur though? They had been told the amount was nearly unlimited, but now when it comes down to it, the distributors are only just managing to cover the minimum. This likely comes down to the different approach WotC has taken to this set. The lack of advertisement was clearly decided because they knew the contents of the set. They knew it didn’t need promoting, spoilers would do that. This made people nervous about moving what is still likely a good print run for a masters set. So they told people to order as much as they wanted. Now when push comes to shove, they can’t fulfill those orders in their entirety. Another factor that has to be taken into account is the difference in shipping this set. Usually WotC gives stores a set amount of product for sets like this and the distributor simply distributes, but this time around the distributors were given an allocation and it was left to them to split the product up between stores. This would likely of been seen as a move by WotC to become less involved in a process that doesn’t particularly effect them business-wise but would have been costing them money, paying staff to spend time sorting out allocations.

Now what does this mean for pricing of the set? It means prices aren’t going to drop like people hoped. This information has been collaborated by as many sources as I could find, but is limited to only UK based stores, that being said it is unlikely there is a major difference is product levels across the territories. This information might never be announced by any parties involved, but if it isn’t this is a perfect time to make some money. Getting in at the bottom a few weeks after release when peak supply hits, but before stock starts to suddenly dry up and people panic and the prices spike. If you see anyone selling cheap staples after a draft or some gambler in your local area has got some boxes to try and crack for value, all I can say is snap them up.

However, this print run doesn’t make buying boxes to hold look like a good idea. With WotC releasing a second wave of the previous masters set, Eternal Masters, this could easily be something we see happen again. Don’t be the one who gets caught with their pants down holding onto sealed product for this set.

All three of my picks for this week are cards that dodged a MM17 reprint and have the potential to start a upwards trend over the next 18 months. All 3 are played across the format, but are also relevant in other formats. 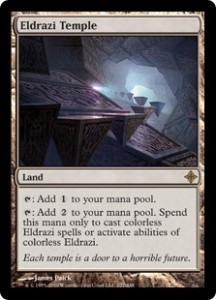 Thank you for reading this week (I apologise again for the lack of content). I hope that I can make your some money and if not at least get some conversations going.